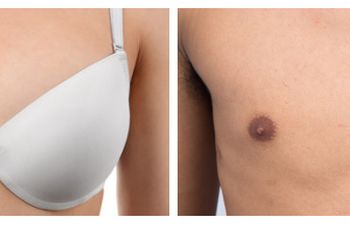 The areola and nipples can often be disproportionate to the breasts, whether this is due to changes in the size of the breasts, pregnancy, and breastfeeding, or genetic factors. Many patients have other abnormalities of the areola and nipples, including gynecomastia in men or inverted nipples. Fortunately, all of these can be resolved through a relatively simple cosmetic procedure. Before you choose to move forward with an areola reconstruction, however, it’s important to understand the pros and cons of the procedure.

Who Can Benefit from Areola Reconstruction Surgery? 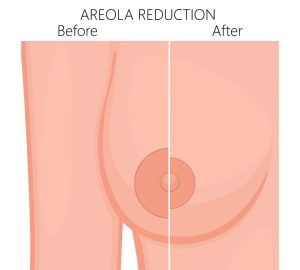 Primarily, areola reconstruction surgery serves to change the shape or reduce the size of the areola. It is commonly performed alongside a breast reduction or breast lift, but may also be chosen as an independent procedure.

Candidates often include those who have had a previous breast surgery, which can impact the areola negatively. Areola reduction is also commonly performed on patients who have increased areola size after breastfeeding. Men suffering from gynecomastia may also be candidates for areola or nipple reduction surgery.

Finally, some patients choose a procedure to repair their inverted nipples, which may be the result of scarring or genetic factors. The steps of this procedure differ from a standard areola or nipple reconstruction, but inverted nipple repair is still an available option for patients.

How is Areola Reconstruction Performed?

In a typical areola reconstruction, the procedure is performed by making an incision around the areola and removing excess skin and tissue. Any resulting scarring is well hidden in the border of the areola.

Repairing inverted nipples is completed by making small, hidden incisions to remove scar tissue or other connective tissues holding the nipple in an inverted position.

Are There Risks for Areola Reconstruction?

Like any surgery, there are some risks for areola reconstruction. However, complications are not common.

Some possible complications include bleeding, infection, nerve damage, loss of sensation, and scarring. For some, the ability to breastfeed can also be effected, so most surgeons recommend waiting until you no longer wish to have children before having the procedure.

Dr. Azouz will thoroughly review your health to determine whether you’re a safe candidate for the surgery and explain steps for your recovery period so that you can best avoid any complications from areola reconstruction.

During the first few days after areola reconstruction, you can expect some swelling and discomfort, though pain can be managed with medication. Serious physical activity should be avoided as you heal. Dr. Azouz will monitor your healing during follow-up appointments and advise when you can return to exercising and performing other strenuous activity. Patients should also be careful to protect the breasts for several months after the procedure, including wearing a supportive sports bra when exercising or playing sports.

Schedule a Consultation with Dr. Azouz

If you’re interested in areola reconstruction, schedule a consultation with Dr. Azouz at Azouz Plastic and Cosmetic Surgery in Dallas, TX. Call (972) 702-8888 or request an appointment online.