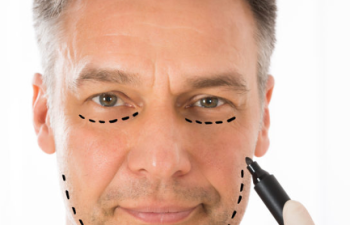 A lot of what we do here at Azouz Plastic and Cosmetic Surgery has to do with reversing signs of aging. However, there are other reasons a patient may opt to have plastic surgery and in this case a facelift. We interviewed two patients about their facelift stories and what motivated them to have a facelift procedure performed by Dr. Azouz in Dallas.

According to Dr. Azouz, Cindy’s situation was a little different than most facelift patients since Cindy had had a Bell’s palsy on one side. Because of this, she had obvious facial asymmetry as can be seen in her pictures that she had hoped to correct. Part of the reason Cindy elected this surgery was because when she had the Bell’s palsy she was very self-conscious. Her left eye would not close and the left side of her mouth did not work. Cindy found this to be very embarrassing and it caused her to avoid leaving the house.

This type of concern is addressed both under the skin, muscles and underlying tissue. First, before the skin, you get under the skin and muscle to reposition the tissues. This means that the underlying tissue over the muscles is moved back and upwards and then sewn into position. With that repositioning, the skin re-drapes over the rest of the face. This technique helps get rid of the jowls and give more definition along the neck and jowls without giving you an artificial look.

After Dramatic weight-loss, many people experience an increase in excess skin. As for Donna, she decided that she needed to make some lifestyle changes, and I lost about 50 pounds. Even though she started to feel much better, she didn’t feel that she looked as good as she felt. Due to her dramatic weight loss, certain features such as prominent jowls became more noticeable. Also, her neck went from her chin down straight, which gave it little to no definition. To take care of the excess skin on and around the face Dr. Azouz did an upper and lower eyelid lift as well as a lower face/neck lift to get rid of the jowls. The best part? Dr. Azouz says that you’ll have a very natural and refreshed look and you’ll just look as if you’ve been vacationing or you’re well rested; people know you look a lot better, they just won’t be able to identify why.