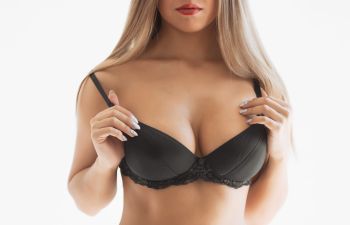 The areola and nipples can often be disproportionate to the breast or chest. Both men and women can suffer from abnormally large or small nipple/areolar size. This can worsen asymmetry or can cause difficulties with tight-fitting clothing.

Some of the common causes of nipple-areolar size discrepancies are size changes to the breast such as pregnancy, breastfeeding, and gynecomastia. Genetics can also be a factor in nipple-areola disproportion. Fortunately, all of these concerns can be resolved through a relatively simple procedure called nipple or areola reconstruction.

Nipple Reduction or Areolar Reduction: What are the common reasons?

Some patients are left with a small or a flat nipple areola after surgery. Dr. Azouz is able to help many patients who have had plastic surgery performed elsewhere and seek more symmetry with a revision procedure. Dr. Azouz frequently performs revision male breast reduction or revision breast lift.

Areola Reduction surgery: Who can benefit?

Nipple reduction surgery changes the shape and reduces the size of the areola. Areola surgery can be done by itself or in conjunction with a breast reduction or breast lift. Nipple puffiness can be reduced in patients who have disproportionate areola and nipples due to post breast-feeding and men with “puffy nipples” who are suffering from male breasts. Other candidates include individuals who would like their inverted nipples reconstructed. Inverted nipples may result from scarring or genetic factors.

In a typical areola reduction surgery, the first step is making an incision around the areola, followed by removing the excess tissue and skin. By making the incision around the areola the scar is well hidden along the border of the areola/nipple. When repairing inverted nipples the incision is also hidden. After making a small incision the scar tissue or other connective tissue holding the inverted nipple in place is removed.

Most patients report that nipple reduction is not painful and are able to do light activities such as computer work, and leisure walks within days. Intense physical activity such as lifting heavy weights should be avoided during the initial healing process. With that being said, Dr. Azouz monitors each patient on their individual healing process with follow up appointments and will advise you when you can slowly return to your daily activities and strenuous exercises.

Can I make my nipples smaller without surgery?

Surgery is the gold standard to anatomically change the shape, size and prominence of the nipple areolar complex. Medical weight loss and hormonal treatments are typically not the best method of reshaping the nipple areola.

How long is the recovery for Nipple Reduction?

The recovery for nipple reduction is generally quite quick. Most patients do not report significant swelling or pain. Dallas plastic surgeon Dr. David Azouz, performs plastic surgery with enhanced recovery. Patients can generally go back to activities including heavy exercise, powerlifting, gymnastics, and contact sports within five to six weeks after their plastic surgery.

Can you fix an Inverted Nipple without surgery?

Inverted nipples are generally repaired surgically. Inverted nipples are common and can affect approximately 5-10% of men and women. Nipples can be permanently inverted or temporarily inverted. Nipple retractors, extractors, shells, and cups are generally associated with temporary and modest results. Nipple piercing is an option for stabilizing and preventing nipple inversion. Nipple piercings can eventually be removed once the nipples heal in an everted position. Dr. Azouz is generally able to preserve the milk ducts for patients who undergo nipple reconstruction so they may still breastfeed.

Can a Nipple Reduction be performed at the same time as gynecomastia surgery?

Can flat nipples stick out more?

If you’re interested in areola reconstruction, schedule a consultation with Dr. Azouz at Azouz Plastic and Cosmetic Surgery in Dallas, TX. Call (972) 702-8888 or request an appointment online.